Today, we know DNA is where we get our traits. We know we inherit our DNA from our parents, and that our DNA contains genes. We know that we can sequence DNA to learn about what genes we have, as well as the genes of plants, animals, bacteria, viruses, and more. We can even change the DNA of living things to change their traits. It is safe to say that the discovery of DNA changed the world.

But who discovered DNA? It’s tough to pinpoint, because many scientists were involved. We knew that traits were inherited due to the work of Gregor Mendel and his pea plants in the mid 1800s. We knew that DNA carried traits because of experiments in 1928, 1944, and 1952 described simply over at Khan Academy. Scientists in 1952 and 1953 were even able to figure out what the basic ingredients of DNA were – ribose, phosphate, and four types of bases. But no one knew what DNA looked like or how it actually carried our genes. 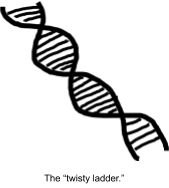 The race to figure out what DNA looked like was won in 1953 by James Watson and Francis Crick. These British scientists are credited with the discovery of the famous double helix, the twisty ladder you see everywhere representing DNA. Other scientists made crucial contributions, including two experimental papers by Rosalind Franklin, Maurice Wilkins, and other authors. This article will describe only the paper by Watson and Crick from January 1954’s Proceedings of the Royal Society.

Watson and Crick were experts in biochemical modeling. Today, this work is done with computers. Back then, it was performed using careful math and 3-D model kits, similar to the ball and stick kits you may have used in school. They verified their model hypothesis with actual pictures of DNA taken using X-rays published by Rosalind Franklin.

Watson and Crick noticed that DNA came in two basic forms that varied in length depending on how much humidity was present. These two forms were found to be the same across all living things tested, even though they had different combinations of bases. This was surprising. A chemical structure with such variation was not thought to take on distinct shapes, called crystalline structures. Yet, DNA’s crystalline structure was surprisingly consistent.

Previous work showed that DNA is a long chain of repeating molecules called ribose, phosphate, and bases, like a string of beads. But nobody knew how they were arranged. Molecules can bump into each other like people on a crowded subway, so certain arrangements aren’t stable. Previous studies including X-ray images of DNA crystals suggested that it was twisted like a screw. Measurements of the screw turns and sizes were known, so they built many DNA models based on what would fit within those measurements.  They found only one that made sense — the double helix. The X-ray images by Rosalind Franklin showed, from a top-down view, that the structure looked like a hexagon. So, DNA was probably a cylinder, which was consistent with the helix idea.

DNA tends to be packed very densely. It’s density led researchers to conclude that there were three strands. However, Watson and Crick proposed there were only two strands. Remember how there were two forms of DNA that differed in length depending on humidity? Measurements of the more condensed, dried form were used to support the three-stranded model originally proposed by scientist Linus Pauling. But, there was also a less dense, stretched form. Three strands would not allow the helix to be so “stretchy,” but two strands would!

Their next challenge was to verify which molecules made up the rungs of the ladder and which molecules made up the rails. Because phosphate and ribose molecules have a lot of electrons around them, they are charged like magnets and repel one another. The only way phosphate and ribose would fit together without bumping into each other would be as the outer part of the molecule. So, the bases probably were arranged like ladder rungs in the center of the molecule. These calculations were independently verified by the X-ray images created by Rosalind Franklin.

The last challenge was to understand the rungs. They determined there had to be two bases at each rung based on the number of bases per turn and the distance between the phosphate and ribose. It was already known that the bases can stick to each other, but only at certain sides of the molecule. This means that the bases could only be arranged in a way that allows those sides to touch.

The bases are called A, T, C, and G for short. They only stick together in certain ways. Cancer Research UK / CC BY-SA

Two of the bases, called adenine (A) and thymine (T), will always pair. Additionally, guanine (G) and cytosine (C) will always pair. Their shapes allow this arrangement, and only this arrangement. The pairing hypothesis explains why previous studies of bases always recovered equal amounts of A and T, and equal amounts of G and C. The strands also run in opposite directions, so the two DNA strands are not only rails on a ladder but are complementary to each other like the sides of a zipper. Watson and Crick verified this complementarity using Franklin’s X-ray images.

The bases are what “spell out” our genes. Their order is unique for every living thing. Knowing the base-pairing rules allowed us to sequence genes, identify living things based on their genes, and perform genetic engineering. Knowing that DNA consists of two complementary strands allowed us to understand how DNA is able to copy itself and produce such an incredible variety of organisms from just four bases. While many scientists contributed to this world-changing discovery, Watson, Crick, and Wilkins received a Nobel Prize in Medicine in 1962 for putting decades of previous evidence together to form a coherent description of DNA and its role in biology.

There may be other ways to build DNA and RNA Researchers have made a synthetic DNA that is made of eight bases instead of the normal four. This genetic system was capable of supporting the requirements of life. This work lays the foundation of how life could look on a different world.

When the DNA building block analogy is taken literally Scientists create tiny sculptures using DNA! In this study, the researchers built a Teddy bear, a rabbit, and the word “LOVE.” Why would someone do this?

Short, Tall, or Average: It’s in Your DNA Over 700 different genes have been found to contribute some small amount to your adult height. The rare ones have a bigger impact than the common ones!

The study was done at: University of Cambridge