Microbes on Earth have adapted to survive in some pretty extreme locations. The extreme dryness of deserts, high salinity in salt deposits, cold temperatures of glaciers, and even high pressures of the deep ocean don’t stop some life forms. Another extreme environment is created by a rock known as serpentinite. This rock has a fitting name, since it is typically green, scaly, and cracked. The microbes that survive in the water within these rock fractures withstand high pH (~12), no light, low oxygen, and low nutrient conditions. For reference, water in lakes and streams is typically pH ~7 and full of oxygen and nutrients. Serpentinite systems are thought to be found throughout our Solar System, in places like Mars or Saturn’s moon Enceladus. Understanding the life that can survive in these extreme places here on Earth can help scientists to understand what life might be like elsewhere in the Universe. 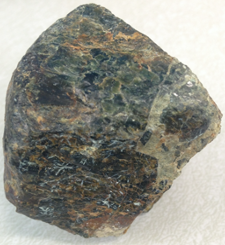 This is a close-up photo of serpentinite rock. Image credit: Mary Sabuda

Serpentinite is found along the ocean floor in places where cold seawater can flow through cracks in the ocean crust and be heated by magma below. As the forces behind plate tectonics shift, crack, and recycle ocean crust, serpentinite can also be found in select places on Earth’s continents where ocean crust has been pushed up onto land. One particular location is in a stretch of northern California, USA.

At their serpentinite field site in California, the authors of this study collected water samples from wells drilled deep into the surface, and noticed that far down below, the water had signatures of dilute ancient seawater. As the authors looked at studies of similar serpentinite systems around the world, they noticed all the systems had varying levels of salinity, and all seemed to span along a range of weak to strong seawater salinity (sodium and chloride) signature. There is a lot of sulfur (as sulfate) in seawater, so the authors wondered if perhaps bacteria could use this sulfate and other sulfur compounds to gain energy in this extreme system. Just like there is a water cycle and a carbon cycle on Earth, there is also a sulfur cycle, and microbes can help to drive these element cycles. The researchers collected water samples to examine the microorganisms living in this environment.

To see what microbes are living there and gain some idea of what they might be doing, the scientists filtered water from the site and extracted all the DNA and RNA from it using kits in the lab. All organisms have DNA, which is composed of numerous genes that hold the instructions to grow and reproduce. Scientists can compare small differences in a gene to see how it varies between organisms and compare them to a database, which can identify specific organisms at their site. RNA is important because it can carry information from the gene to the place where a protein is made inside the cell. If RNA for certain sulfur cycling genes was active, that means the organism is likely using the sulfur to generate energy.

Upon analysis, they found that certain bacteria could not only use the sulfate, but could also use other sulfur compounds, like sulfide, thiosulfate, and polysulfides to gain energy. This is important, especially as researchers look to the potential for life elsewhere in the Universe. While extraterrestrial life has not been found yet, perhaps if it is out there, that potential life could also use elements like sulfate to generate energy. The authors also suggested that since these extreme systems originated on the seafloor as normal ocean crust, perhaps this process could transport seawater, sulfur, and potentially microbes onto continents and be a link between marine and terrestrial environments.

Can hidden sulfur cycling influence greenhouse gas emissions in wetlands? A recent study revealed that at least some methane emissions from wetlands come from sulfur bacteria living in the area between the creek bed and the groundwater. But, it's not simple. Some bacteria may be limiting methane, too.

Mining with acid-generating bacteria Sulfuric acid production by sulfur-oxidizing bacteria may be a solution to a long standing mining problem.