Image Credit: "Fireworks" by Verpletterend is licensed under CC BY-SA 2.0
By Justin Dingman

Happy July everyone! This month brings many reasons to celebrate, from America’s fourth of July to France’s Bastille day. Between the bites of apple pie and burgers, one tradition has remained a constant in America: fireworks. However, during this past fourth, while watching the fireworks with my nieces and nephews, they all gathered around to ask me one simple question:  “Uncle Justin, how do fireworks work?”

It didn’t take long for chemists and firework artisans alike to figure out the perfect recipe for fireworks. They discovered that fireworks required four basic elements to burn at the right time and at the right temperature: an oxidizer (a chemical compound that provides oxygen to burn), a fuel (a chemical compound that is flammable), a binder (a chemical that acts like a glue to combine all of the necessary chemicals), and a colorant (the chemical that provides the color, shine, and shape of the firework).

Fireworks originated in China, approximately 1000 years ago, with the invention of gunpowder. Somewhere in China someone discovered the right mixture of charcoal, sulfur, and potassium nitrate that created an explosion. This early gunpowder mixture was originally used in religious ceremonies to ward off evil spirits, and in war to ward off enemies. Scientists took interest in this phenomena as they began to synthesize and burn chemicals in order to see their spectra, or their visible energy. 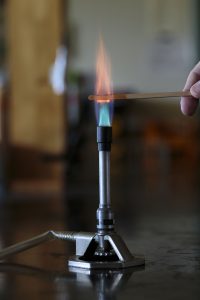 Robert Bunsen invented this thing you might remember from high school science class. This is a metal called cobalt burning orange in the Bunsen burner flame.

Dr. David Alter provided early evidence that the colors that began to make up fireworks were dependent on the different types of chemicals used in the firework making process, and this still rings true today. In red fireworks, strontium salts are typically used. Orange fireworks are made with calcium-containing compounds, while sodium compounds yield a yellowy-orange hue. Green fireworks use barium-containing compounds. Copper compounds yield a blue color when burned. Interestingly, purple fireworks use a combination of copper and strontium salts. If you remember back to your color wheel days, the combination of red and blue makes purple, the same way the combination of red and blue fireworks makes a purple firework. For white, silver, and shimmering fireworks, makers rely on magnesium, titanium, and aluminum salts.

Building upon the previous work of Dr. David Alter in the 1850’s, German philosophers Gustav Kirchhoff and Robert Bunsen (and yes, that is the same scientist after which the Bunsen Burner is named! See photo to the left.) were inspired to study spectroscopy and define a systematic approach to phenomena of color. By October of 1859, the two scientists had invented a prototype spectroscope which they used to investigate the color of burning elements. Using it, they were able to identify the characteristic spectra of sodium, lithium, and potassium, to name just a few chemicals, and solidified the science of spectroscopy. Many of these chemicals emitted light on the visible spectrum and therefore could be assigned colors based on their spectra.

This is the spectrum of colored light we can see, compared to all the types of electromagnetic waves we can’t see! Source: Flickr

60 years later, in 1900, Max Planck went on to describe the quantum mechanics of color. When you excite an element with enough energy, it prompts one of its electrons to jump into a “higher” energy state. Then, the electron will lose some of its energy and “fall” back down into its lower energy state. However, due to the law of the conservation of energy, we know that energy can neither be created nor destroyed, so when the electron loses its energy, that energy has to go somewhere. The element actually releases this energy in the form of electromagnetic energy, otherwise known as light. The color of this light is directly related to the energy difference between an electron’s “higher” energy state and its “lower” energy state.

I hope that the next time you look up into the colorful night sky on the fourth, you can come to see the wonder and the science behind the local firework display.

Getting Rid of Graffiti with a Two-Wavelength Laser A combination of ultraviolet and infrared radiation may be able to blast graffiti off of valued stone monuments, restoring them for future generations

Life Under a Black Sun What would it really be like if our sun was a black hole?

Original study: On physical properties of light produced by combustion of different metals, in the electric spark, refracted by a prism

The study was done at: Not applicable

The study was funded by: Not applicable - he was independent

Raw data availability: Not applicable - this paper is from the 1800s.