Imagine a spherical, artificial shell surrounding a star – capturing the energy of that star for an advanced alien civilization. How might we discover the presence of such a shell from our place here on Earth? Might we ourselves one day build such a sphere? And why are they often called “Dyson Spheres”?

Freeman J. Dyson was a physicist and mathematician known for a variety of research publications and endeavors in astronomy, quantum electrodynamics, and solid-state physics. He also wrote extensively on fantastical ideas in the realms of the origin of life, evolution, artificial intelligence, the mind, space exploration, and extraterrestrial life. But perhaps he is best known for an idea he presented in an article in 1960, which has now come to be known as the Dyson Sphere.

In Dyson’s original article, titled “Search for Artificial Stellar Sources of Infrared Radiation”, he considered attempts in the Search for Extraterrestrial Intelligence (SETI). In the 1960s, much as today, most SETI projects involved looking for potential signs of intelligence alien life in the form of signals received in the radio wavelengths of light. Dyson presented a thought experiment, inspired by an earlier science fiction work from Olaf Stapledon, that might allow for finding alien life through another means.

In human civilization’s history, we have progressed exponentially in our use of technology, and along with that has come an exponential increase in the amounts of energy and matter that we consume. We went from living like our primate cousins, dwelling among forests and grasslands, to developing fire for cooking food and heating our homes, to building cities and then city states and then mega-cities. We’ve harnessed steam and electricity and the energy of nuclear fusion. We’ve taken the earliest of steps of leaving our own planet and exploring the space around our world. While developing to our current age of the internet, smart phones, self-driving cars, and global connectivity through air travel, we’ve also amplified our requirements for resources – for energy and for matter.

Dyson speculated in his 1960 article that the same might likely be true for any similar civilization passing through an industrial age and moving beyond (he was careful to explain that we might not know the motives of alien civilizations, so he used a civilization and solar system similar to our own as his example). He suggested that one foreseeable direction of this continued consumption of matter and energy would be for a civilization to develop a large shell that could entirely surround the star of that civilization, and would allow the beings to use all of the energy being emitted from their star for energy. It’s this shell that has come to be known as the Dyson Sphere.

For the thought experiment using a similar star system to our own, Dyson originally assumed that the shell would have roughly the mass of Jupiter (believe it or not, Jupiter is so big that all of the other planets combined only have about 40% of the mass of all of Jupiter), the star would had the same amount of energy being emitted as our Sun, and the sphere has a radius of about 2 AU (an AU is an astronomical unit, so the sphere would have a diameter of ~372 million miles (598 million km)). Even if the civilization living in the shell were able to use the energy of the star fairly efficiently, the shell itself would still naturally heat up until it started to emit some energy in the form of infrared radiation.

This emission of infrared light from the hypothetical shell led Freeman Dyson to propose that such civilizations could be observable, even from ground-based telescopes on Earth; hence the title of the paper “Search for Artificial Stellar Sources of Infrared Radiation”.

Although a full sky survey looking for specific points in space that emit infrared light at the likely wavelengths of such spheres would be ideal, it would be technologically challenging at the present time. 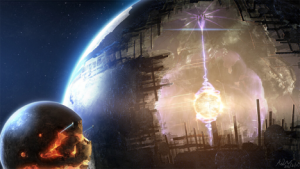 “Dyson Sphere” by yourlocal-t-rex is licensed under CC BY-SA 2.0

First, there is a possibility that these large structures would be built such that they don’t catch all of the light of the star (maybe due to a limit on the materials for building). In this case, the mega-structure may be more like a giant ring of a series of bands. This may remind readers of the science fiction idea of a ringworlds, first presented by Larry Niven in his novel Ringworld, and also explored in the Halo video game franchise.

Another possibility is that the star around which a large spherical artificial biosphere is built might itself be a member of a binary system – where the star orbits around another star. In such a case, the star that is not concealed by the sphere would show gravitational movements suggesting the presence of another star. A search for nearby infrared sources could then allow for the detection of the Dyson Sphere.

To date, we haven’t discovered a Dyson Sphere in space. However, announced in 2015, astronomers detected irregular dimming of the light coming from a star known as Tabby’s Star. Even though recent research suggests that clouds of dust or even debris from destroyed exomoons may be the likely cause of the dimming, Tabby’s Star caused a bit of buzz among astrobiologists and space exploration enthusiasts as construction of a mega-structure around the star was one of the early considerations (and remains a possibility). As we continue our observations of the night’s sky, who knows what the future may hold? Perhaps tomorrow we’ll make the first detections of a Dyson Sphere.

Unfortunately, if such a detection were to occur, Freeman Dyson wouldn’t be here with us to enjoy the discovery. Dyson passed away this year, after a 96 year life full of exploration and curiosity. While it’s quite possible that many of his ideas will pass into history, servings as relics of the ways we thought about ourselves in the cosmos during the 20th and 21st centuries, the potential for finding Dyson Spheres and even for creating one of our own in the not-too distant future will leave a lasting memory of Freeman Dyson.

In closing, we might consider our own potential future in the words of Dyson from his 1960 article:

“One should expect that, within a few thousand years of its entering the stage of industrial development, any intelligent species should be found occupying an artificial biosphere which completely surrounds its parent star.”

Note: You can read Dyson’s original paper along with some community comments over at Fermat’s Library.

What is direct heating and how does it impact our future? With some simple calculations, two scientists estimate that Earth will be unlivable by 2370 due to direct heating, which, despite how it sounds, is not related to climate change.

Life Under a Black Sun Did you know that a black hole is a kind of star? What would it really be like if our sun, also a star, was a black hole?

The study was done at: Institute for Advanced Study (Princeton, New Jersey, USA)