Building a Mars colony is on everyone’s mind. SpaceX is testing a Mars starship prototype. Jeff Bezos is funding a Lunar Gateway for manned Mars missions. Humans are certainly getting closer to stepping foot on the Red Planet. However eager to start a Mars settlement as we may be, we have to answer a few questions before we can get there. This goes further than starships and habitat life support systems. It includes ethical questions for scenarios no human has been faced with before.

How do we establish a society on another planet? How will that society work?

These are concepts Konrad Szocik and his team explored in Visions of a Martian Future. Szocik’s team of researchers use Earth’s history as a guide to answer these questions. Making a Mars colony successful depends on how we decide to overtake these challenges.

Humans evolved on Earth, not Mars. This starts our journey with our first deep, ethical question. Should we go as we are and mold Mars to support us, or should we enhance humans now to make us more adaptable for Mars? Modifying the human body always brings up a lot of spicy ethical debates. A Mars colony may be the catalyst we need to really grok the consequences of human gene editing and robotic enhancements. It could mean altering the genes of the first Mars settlers.

But no matter how we prepare them, making Mars support human life would still take centuries. This leaves the settlers living in Earth-dependent habitats for the first few generations. Independence from Earth would call for using purely Martian resources.

The timescale needed for a Mars settlement includes looking at resource consumption. Mars has even fewer usable resources than Earth. Using growth patterns on Earth as a model, Mars-dwellers would soon face a problem we’re barely starting to see on Earth. They estimate a Mars society would run out of resources in a couple centuries. That means that a truly independent Mars colony probably has an expiration date. Unless, of course, we make some drastic changes. 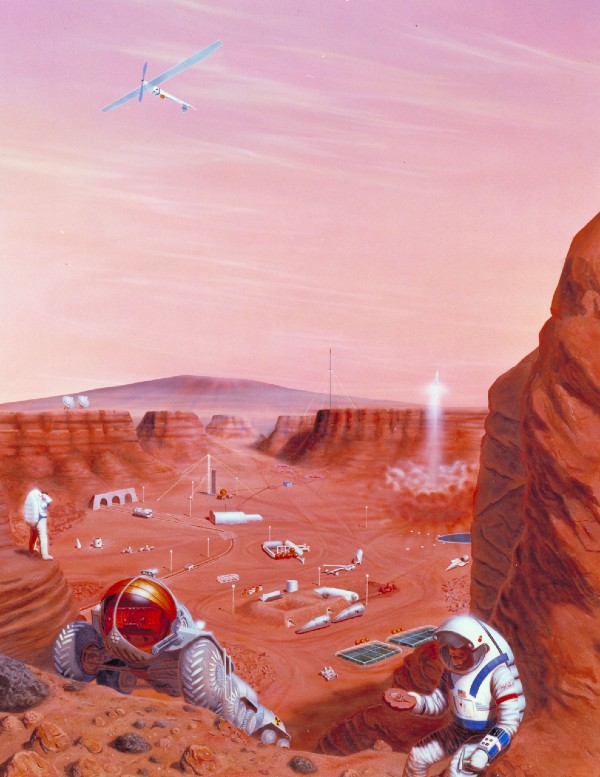 On Earth, it is easy for us to get stuck investing in ourselves now because of perceived promises to our future kin. This is what the team calls “deep egoism.” The team suggests that colonists’ investments in the future would take sacrifices now. The Mars-dwellers would be living for generations they’ll never meet. The team calls this “deep altruism.”

The goal is making a Mars-based society last more than a couple centuries. The deep egoism driving Musk and Bezos to send humans to Mars within this decade just wouldn’t cut it.

Alternatively, the deep altruism in the team’s thought experiment brought up a different dilemma. Humans have not yet found solutions to our current Earth struggles. The authors are concerned that efforts redirected from Earth to fund and build a Mars colony may not outweigh the scientific and technological advancements gained.

Altruism brings up a lot of interesting challenges for the Martian society, too. The Mars colony needs to keep its citizens free, while inspiring them to make choices that benefit everyone.

This idea brought up an interesting topic for the team: religion. Despite the rather dark history religion has on Earth, there may be a benefit to a Mars religion. Developing a new religion may be critical to a long-lasting Martian society. The astronauts who live on Mars would have to bear the weight of heavy sacrifices to things we take for granted. Social and work life, family, diet, and personal space would all be owned by colonists who haven’t even been born yet. The authors suggest that religion may give them a reason for why they are doing it and prevent the blows to morale.

Of course, there isn’t any way of knowing how humans will respond to such a massive undertaking. A Mars colony is a lofty goal. It’s okay if we don’t have all the answers yet. Humanity is good at finding ways to endure. But dreaming of future Mars settlements may prove helpful to improving our lives on Earth now.

Mars could host a deep underground biosphere Scientists estimate that parts of Mars’ would be able to support up to one million microbes per kilogram of rock deep underground.

Deep-ocean rocks mimic early Mars A red clay rock formation of the Central Indian Ocean basin was examined as a possible replica of what Mars was like millions of years ago. Because these rocks host microbial life, they can be used to study types of life that could exist on Mars.

The study was funded by: This research was unfunded.