Image Credit: Lettuce being washed. Made by Sciworthy on Canva.
By Gina Misra

Bacteria E. coli, Salmonella enterica, and Listeria monocytogenes are major causes of foodborne illness associated with raw vegetables such as lettuce, tomatoes, and sprouts. The produce industry and the scientists who study it are all concerned about making sure sanitizing these foods after harvest works as well as possible, with minimal impact on the environment.

Chlorine-based sanitizers are still the dominant form of disinfectant used in the industry. Chlorine disinfectants come in the form of salts, such as sodium hypochlorite (bleach). This molecule is NaClO – one sodium atom, one chlorine atom, and one oxygen atom. In order for the chlorine to actually kill bacteria, it has to be freed from the molecule. Dissolving NaClO in water frees it, but the story doesn’t end there.

One way around this problem is to just add a large amount of NaClO, or whatever chlorine compound you’re using, to make sure there’s always enough free chlorine. Wash solutions also need to be refreshed with new chlorine as it gets used up. Unfortunately, some products that result from chlorine reacting with random organic molecules are bad for human health and don’t break down very easily in the environment once the wash water is discarded. So you don’t want a lot of them around if you can help it.

Researchers at University of Guelph in Ontario, Canada conducted a study, published in the journal Food Microbiology, to test a method of treating wash water to break down organics first so there is less for the chlorine to react with. This method is called pre-oxidation.

Lettuce producers may use oxygen-containing chemicals or UV light to break apart the organics. The technique used in this study, the Advanced Oxidation Process, is special because not only does it break down the organics, but it turns them into gasses (carbon dioxide among them) that bubble out of solution and float away. This process uses ultraviolet light to make “free radicals,” which breaks up pairs of oxygen atoms (O2 gas) into single rogue oxygen atoms that quickly damage organics.

First, they had to determine the optimal protocol. They submerged a special kind of UV lamp (UV-C) housed in an aluminum tube into a test solution made of distilled water, ferric chloride (an iron salt), hydrogen peroxide, and a blue dye called methylene blue. They varied the amount of ferric chloride (which helped the reaction work) and hydrogen peroxide (the source of oxygen). They also varied how much light the solution was exposed to – pumping the solution past the UV light 1, 3, 5, 8, and 10 times. The methylene blue was the target for oxidation. A device called a spectrophotometer was used to “read” the tube of blue liquid and tell them how much remained at the end of the run. As expected, increasing the amount of UV light broke down more of the dye. 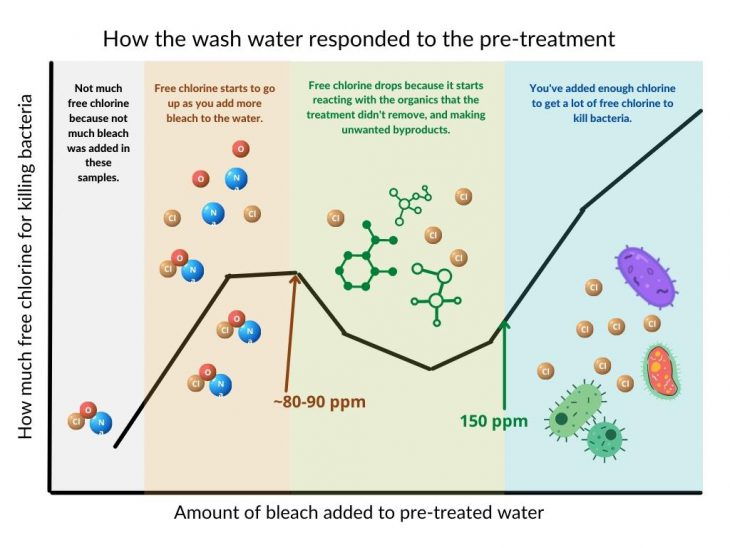 The green area on the graph is where the chlorine reacts with the organics. They wanted to minimize this as much as possible. They determined that the optimal mix to produce the outcome shown in the figure was 340 mJ/cm2 of light, 9.6 mg/mL hydrogen peroxide, and 9 mg/L ferric chloride. (We made this figure as a simple representation of one of the paper figures, for education purposes only. See the original article for actual data.)

After determining the optimal dosage of light, peroxide, and ferric chloride in their first experiment, they set up a second experiment to test it on actual lettuce wash water. Then, they used the solution to wash lettuce heads that were intentionally contaminated with Salmonella, Listeria, and E. coli, followed by uncontaminated lettuce to measure the risk of cross-contamination.

They made their lettuce wash water to resemble what would be found in a packing house, based on tests of water composition in real facilities. It contained some lettuce juices, sodium chloride (table salt), and a small amount of bentonite clay. First, they treated the water to remove organics, and then chlorinated the water. Next, they washed the two sets of shredded lettuce heads – first the contaminated lettuce, followed by the non-contaminated lettuce. This is to simulate an event in a packing house where a contaminated lettuce head would contaminate the wash water and spread it to downstream batches of lettuce.

The researchers found that the advanced oxidation process did reduce the chlorine demand of the wash water, but did not reduce the chlorinated byproducts enough. In fact, it appeared that the chlorinated byproducts themselves were toxic to bacterial cells. The treated water and regular wash water worked about the same to kill pathogens. But, the treatment did not seem to help the problem of toxic byproducts in spent wash water. They suggest that this process still needs to be refined, but that needed modifications might be difficult to do at scale.

Is lettuce grown in space nutritious and safe to eat? Lettuce that was grown in space has been analyzed and shows evidence that the crops can be grown and consumed by astronauts during space travel

Washing lettuce might not remove all the germs Human norovirus, sometimes called the "stomach bug," found a way to stay attached to fresh produce even when it’s washed.

Smart farms should clean their greens No foodborne illness outbreaks have yet been associated with microgreens, but recent research suggests that there is still a risk.

The study was done at: University of Guelph (Canada)

Raw data availability: Data will be made available upon request to the authors.

Featured image credit: Lettuce being washed. Made by Sciworthy on Canva.