NASA will generate invaluable data on yeast’s response to deep space radiation by launching the BioSentinel satellite in 2021. Here’s how they’ll do it.

It’s an exciting time to be interested in space. We’re in an era of scientific discovery that spans into deep space, which is past the Earth’s atmosphere, the International Space Station (ISS), and even the Moon. While it would be thrilling to send humans into deep space, it’s not safe yet to do so. Radiation levels are extreme in deep space, and human exposure would cause severe health consequences, some of which are unknown. Since we can’t send humans into deep space, NASA is instead sending yeast on the BioSentinel satellite. Recently, NASA scientists published their study of the ideal ways to maintain yeast in space.

Right now, yeast is the ideal candidate for a deep space mission because it is easy to maintain. It is robust, resistant to extreme drying, and likely to survive for a long time in the right conditions. Since the BioSentinel satellite will be in space for 6 to12 months, it is vital that yeast can survive the whole mission with no maintenance.

The satellite is small, but it has everything yeast needs to survive. It has a heat regulation system, filters to reduce contamination, and a visual sensor. To measure the effects of radiation on yeast, the cells will be dried and rehydrated at specific points during the mission. While the satellite hasn’t launched yet, once the yeast is active and rehydrated, the satellite’s visual sensor will track the yeast’s growth and metabolism.

To determine the effects of radiation on the yeast, the researchers looked at two types of yeast. One was a regular strain of yeast, and another was particularly sensitive to radiation damage. Both types of yeast have genes that are similar to genes in humans, so scientists can tentatively extend their results to us, humans. 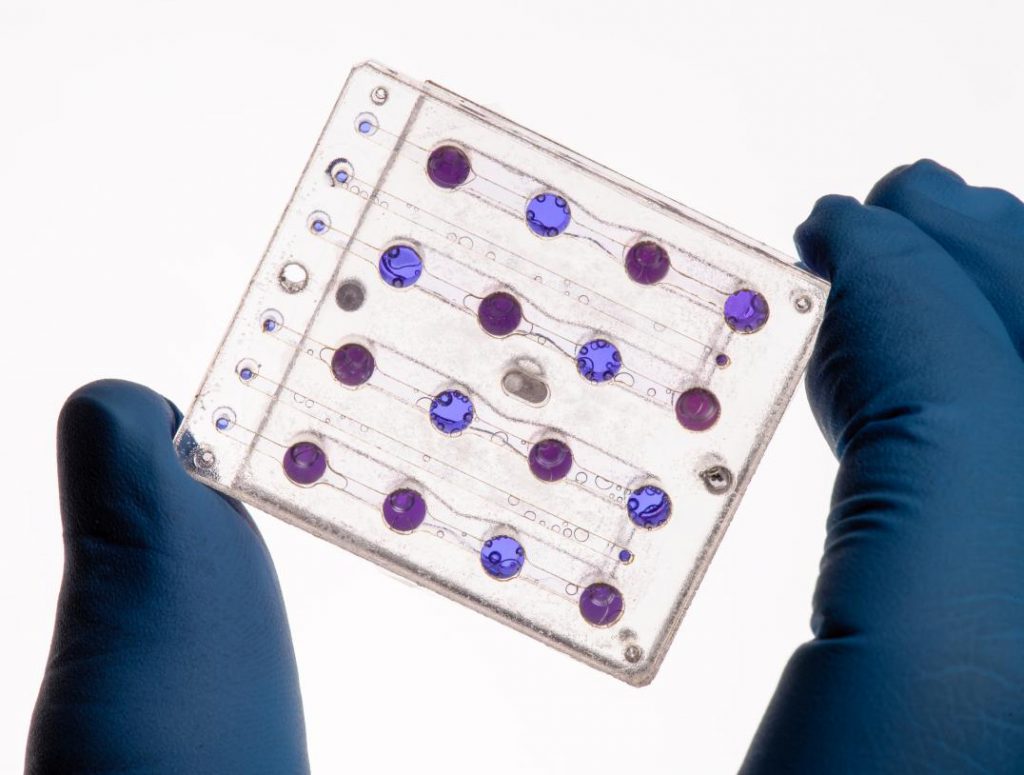 This is a “microfluidics card” developed by NASA. The colored wells contain actively growing yeast that will be sent to space. Source: NASA

For the research to work, scientists needed to determine the ideal method of drying the yeast to make sure it would last the whole mission. Scientists tried air-drying, freeze-drying, and vacuum-drying. They also used different temperatures, humidities, and radiation exposures to characterize optimal conditions. Then, they determined cell growth for each condition.

First, scientists found it was better to air-dry the cells than to freeze-dry or use vacuums. Both types of yeast (regular and radiation-sensitive) had the least amount of damage after air drying than the other two methods. Second, low temperatures such as 4°C-9°C or 39.2°F-48.2°F were the most ideal conditions for yeast survival. Interestingly, the regular yeast cells didn’t grow any differently in very low temperatures, but the radiation-sensitive cells did. It’s possible that altered yeast strains are more likely to be weak in multiple ways, which could cause sensitivity to radiation and temperature. And, of course, radiation affected both strains. Both types of yeast had low survival when exposed to radiation. The radiation-sensitive yeast died faster than the normal yeast.

Perhaps most importantly, the yeast cells survived for a mission-relevant period of time! In optimal growth conditions and similar amounts of radiation expected from the mission, both types of yeast survived long enough to retrieve data in deep space. The radiation-sensitive yeast had lower survival rates, which is likely because of its radiation exposure.

This data bodes well for BioSentinel’s success. Given this exciting preliminary data, we’ll be fascinated to see the results from the BioSentinel satellite itself in 2021.

Bread yeast can help humans explore space! Studying the effects of radiation on yeast cells can help us understand how astronauts’ bodies may be affected during long term space travel. This paper describes an experiment that will be conducted on board the satellite BioSentinel.

How stars can limit life in the universe For the past few decades, scientists have been looking at planets outside of our solar system to see if they could host life. Now, scientists have discovered another factor for habitability: radiation from the planet’s central star.

The study was done at: NASA Ames Research Center

The study was funded by: “This work was supported by NASA's Advanced Exploration Systems Division in the Human Exploration and Operations Mission Directorate”

Raw data availability: Access not clearly stated on the paper, but it may exist somewhere else we can’t find.